The 60% keyboard world is certainly an interesting one. It can be described as a niche within a niche and a lot of people wonder “just how can you type on that puny thing?”.

However, we will delve deeper in this in a future article. First off, let us have a look at the keyboard featured in our first part of the Keyboard Wonderland – both as a motto and a photograph.

Let us remember the motto.

Because keyboards are accessories to PC makers, they focus on minimizing the manufacturing costs. But that’s incorrect. When America’s cowboys were in the middle of a trip and their horse died, they would leave the horse there. But even if they were in the middle of a desert, they would take their saddle with them. The horse was a consumable good, but the saddle was an interface that their bodies had gotten used to. In the same vein, PCs are consumable goods, while keyboards are important interfaces. 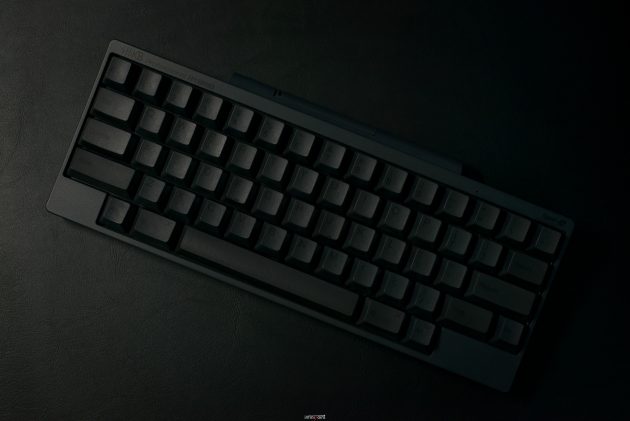 The Happy Hacking Keyboard (or HHKB henceforth) is a 60% keyboard with a layout that became known as the “HHKB layout”. I know, right? It is a board that uses in its build the Topre switch, a capacitive hybrid switch that is both part of the membrane keyboard world and the mechanical keyboard world. It is an interesting fusion that yields absolutely amazing results in terms of tactility and sound, as well as in the overall feeling of the keyboard.

As the name implies, it is also a Bluetooth – wired hybrid which can function on either connection with the computer you are using, be it a Mac or a PC running either Windows or Linux. It is light, weighing in at approximately 540g without the two AA batteries required for it to work in Bluetooth mode (it will work without batteries when connected with a USB type C cable).

You can pair this keyboard with four devices via Bluetooth and you can then switch between them with a key combination.

The model we are going to talk about today is the Type-S, which the factory silenced variant of this PFU flagship product. Topre boards are a different beast altogether and require special solutions for this in the form of silencing rings. These rings can be bought aftermarket as well and silence the upstroke of the keys if you buy the regular version. This has a massive effect on the overall feeling and sound of the board by eliminating the higher pitched sounds and giving us a deep and satisfying typing sound.